This is one of the many reasons I love Seattle.

All School Walkout and Students Protest for Solidarity

Students all across Seattle, will be hosting a walkout and gathering to protest the election of Trump to office. There have been several walkouts organized after the election of Donald trump. Now, students invite the community to come see for themselves why they are so opposed to Trump’s leadership.

The walkout will take place starting at 1:30 from the students school of origin (included schools: Franklin, Garfeild, The Center School, Nova, Sealth, and UW). Students will then meet up at Cal Anderson park (1653 11th Ave, Seattle WA, 98122) at 2:30. It’s a positive opportunity to show the greater Seattle community how much they care / are impacted by the issue.

The students will also be hosting a later “Protest for Solidarity” at Westlake Park (401 pine st, Seattle WA, 98101), at 4:15 pm, to express their feelings after the election and how they plan to about it going forward. Hosted by Emma Reid, Viv Nicole, and Samantha Wisner-Simmons. “EVERYONE is welcome…”

“Seattle is a diverse community, and it’s our immigrant/refugee populations, LGBTQ folks, religious diversity and colorful mix of racial demographics that makes us who we are. as students, we grew up in classrooms that reflect that. Trump is threatening our core value of tolerance as a city. We had to use our voices and numbers to show that we stand with members of our community who may not feel safe now. we’ll continue to resist attacks on those around us with any/all forms of student activism!”

And from the Capitol Hill blog:

“Seattle Public Schools is steadfast in our support for all students,” a spokesperson said about the planned Monday protest. “While the protests are not sanctioned by the district, SPS students do have the right to peacefully demonstrate and express their personal views.”

The citywide walkout would follow a walkout last week in West Seattle and a major demonstration involving more than 5,000 people that marched peacefully from downtown across Capitol Hill Wednesday night. Unrest and protest in major cities across the nation has continued including protests in Portland that have been declared “riots” by police after violence and property damage. 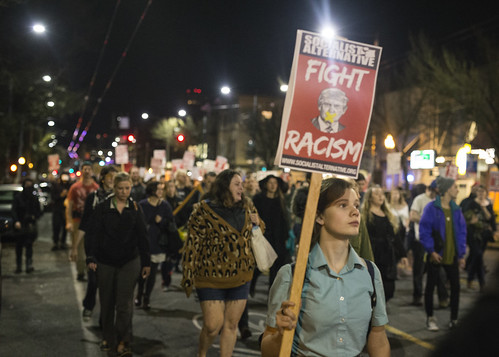 There is more to come in Seattle. City Council member and District 3 representative Kshama Sawant has lead her Socialist Alternative party’s call for a massive general strike on Inauguration Day, January 20th, 2017:

This is only the beginning. Plans are underway for huge nationwide protests around Trump’s inauguration on January 20th and 21st to send a clear message that we reject his right-wing agenda of bigotry and pro-corporate policies. We need to build a grassroots movement against threats to escalate mass deportations of immigrants and a clampdown on Muslim communities, among other attacks. Socialist Alternative will be at the forefront of building these demonstrations and organizing broad community coalitions to stand united against bigotry and hate.

Mayor Ed Murray has also responded to the election, taking part in a rally at City Hall and declaring that Seattle will remain a Sanctuary City welcoming immigrants and standing in defiance to any new policies from the Trump administration.

This weekend will bring opportunities to gather — and organize — to Capitol Hill.

Sunday, a group of SPU graduate students in marriage and family therapy are organizing a community gathering in Cal Anderson Park with hopes of a non-political show of “love, support, and togetherness.” Organizers of Love Over Hate are looking for community members to be part of the demonstration. Organizers of the family friendly event hope people will bring sidewalk chalk, bubbles, and more to help mark the day. Bring an umbrella, too. 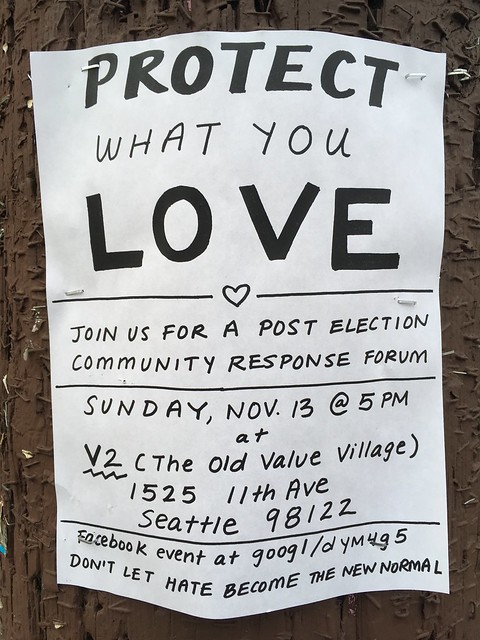 Sunday night, a more structured event is planned at 11th Ave’s V2 in a Post Election Community Response Forum “to process what happened, and develop next steps for protecting the people we love, fighting the national dialogue of hate and defending our rights.”

Local Democratic organizers are also stepping back for some soul searching. Tuesday night, the 43rd District Democrats are coming together for a “Where Do We Go From Here?” gathering.

Many smaller efforts are also popping up. 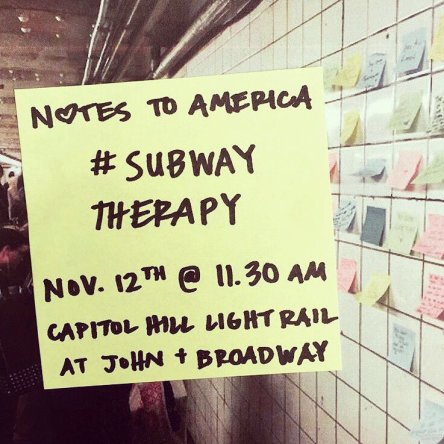 Seattle Public Schools said students who participate in the walkout Monday will not face discipline. The walkout is not a SPS sanctioned event. “Staff are not taking part in the student-organized demonstrations,” the spokesperson said.

“As a district we are responding to the requests and needs of our community and many schools are developing lessons and activities to have appropriate, post-election conversations in school buildings,” the SPS statement on the planned Monday actions concludes.

To follow are Seattleites at Cal Anderson Park on Sunday: 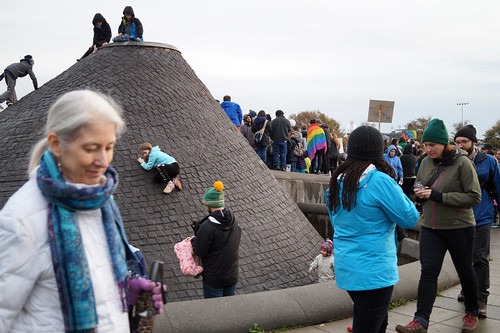 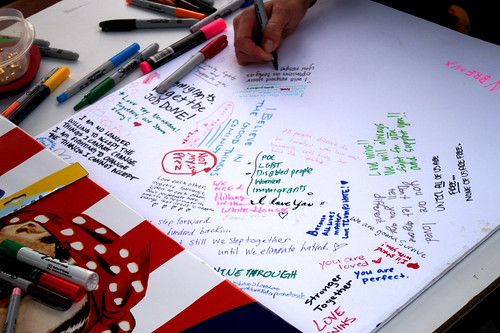 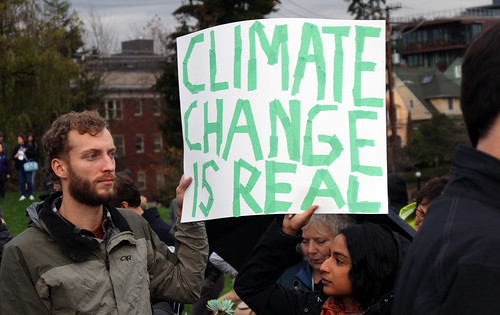 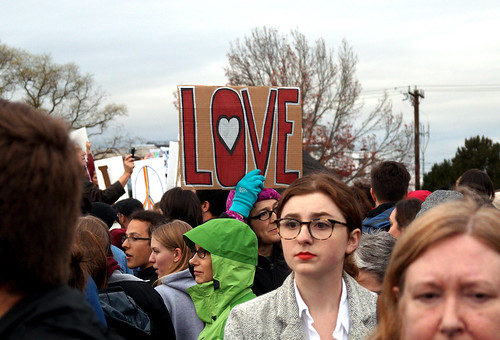 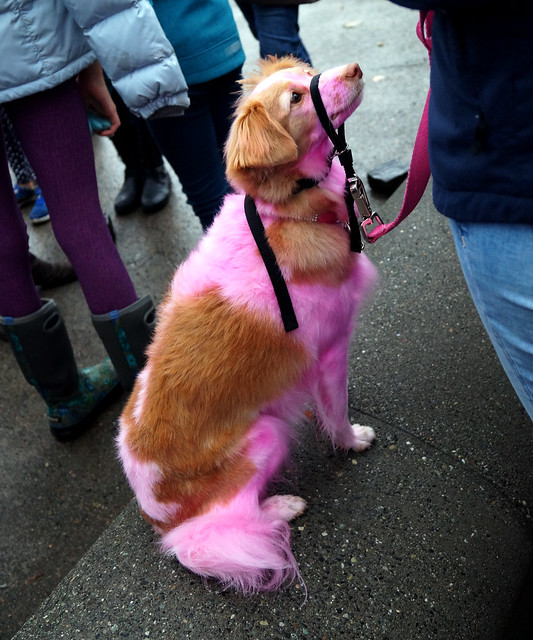 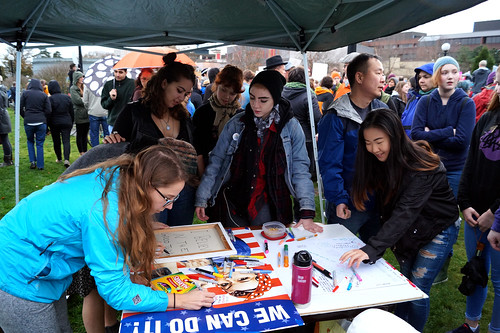 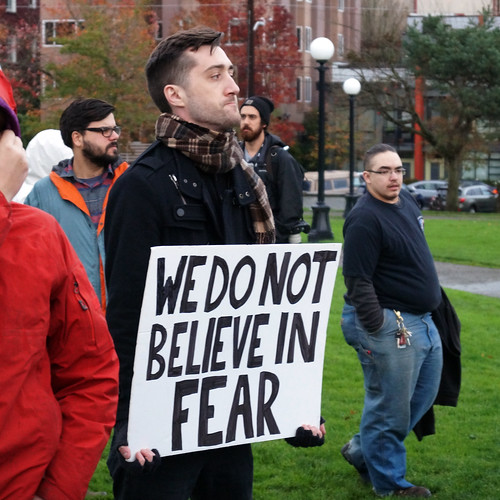 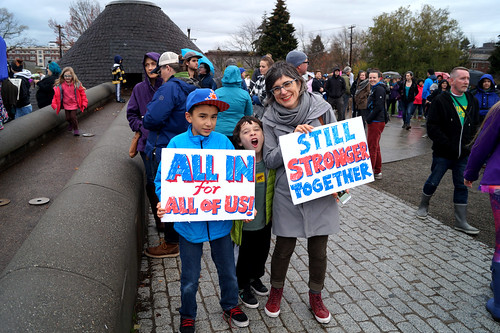 On Sunday there was a meeting to discuss where to go from here. 600 people showed up and the overflow went to Cal Anderson Park.