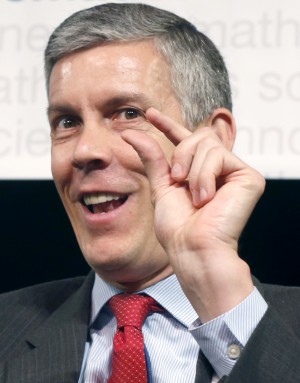 Is Common Core illegal? Did Duncan break the law?

When I worked in the U.S. Department of Education in the early 1990s, I was frequently reminded by colleagues and counsel that the Department was forbidden by law from interfering into what was taught in the schools. When the Department made grants to professional groups of teachers and scholars to create “voluntary national standards,” I made a point of never interfering in their work. I extolled the value of having standards that states, districts, and schools might find useful but made clear that the decision to use or not to use the standards was strictly voluntary. There was no thought that the Department could advocate for the standards or use money to bribe states to adopt them. That would have been illegal.

This is what the law says:
Public Law 103-33, General Education Provisions Act, sec 432, reads as follows:

“No provision of any applicable program shall be construed to authorize any department, agency, officer, or employee of the United States to exercise any direction, supervision, or control over the curriculum, program of instruction, [or] administration…of any educational institution…or over the selection of library resources, textbooks, or other printed or published instructional materials…”

But consider this: in 2009, the federal Department of Education used billions of dollars as part of its “Race to the Top” to lure states to adopt the Common Core standards. That is the reason that 45 or 46 states adopted them. According to Robert Scott, former commissioner of education in Texas, his state was asked to adopt the CCSS before they were finished. Since the Department of Education could not pay for the creation of the standards, the Gates Foundation stepped in and provided the necessary millions. In order to win a waiver from the absurd demands of NCLB, states had to agree to adopt the Common Core standards.

The role of the federal government in offering money to states to adopt the standards may well have been illegal. Secretary Duncan’s fervent advocacy for the standards at every opportunity may well be illegal. His denunciation and ridiculing of critics of the standards as Tea Party extremists belies his insistence that the federal government had nothing to do with the Common Core standards. If he had nothing to do with them, why is he their number one salesman? Why does he so stridently belittle their critics and mischaracterize their motives?

This is dangerous territory. These are questions that should be carefully considered by Congressional committees, not brushed aside as unimportant. No matter how frequently the Business Roundtable and the U.S. Chamber of Commerce and major corporations publish ads to support the CCSS, there remains the question of whether the federal government acted legally and properly.

And we might ask those major corporations why they care so much about the Common Core and so little about the scandalous growth of child poverty in the United States. And we might ask whether they will pledge to stop outsourcing jobs to low-wage countries so that our high school graduates and college graduates are not only “career-ready” but have careers that exist for them once they graduate.

What If the Common Core Standards Are a Huge Mistake?

Laura H. Chapman: What Federal Law Says About the Role of the Federal Department of Education