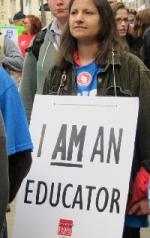 I AM AN EDUCATOR is a new website dedicated defending the humanity of the educator and a vision of education that contributes to creating a socially just society. 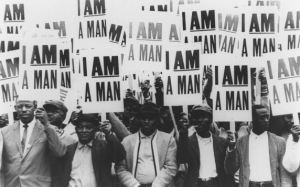 On February 1, 1968, two Memphis garbage collectors, Echol Cole and Robert Walker, were crushed to death by a malfunctioning garbage truck.  Outraged by the city’s response–in what was a long history of neglect and abuse of its Black employees–1,300 African American men from the Memphis Department of Public Works went on strike. This struggle soon captured national attention as Martin Luther King, Jr. took his “Poor People’s Campaign” to Memphis in an effort to fuse the movements for racial and economic justice.   At one march for the sanitation workers, more than 200 strikers marched through Memphis carrying placards with the message, “I AM A MAN.”

This would be Dr. King’s final struggle, as he was assassinated while helping to build this movement.

Yet the sanitation workers would go on to win their strike, and on April 16, 1968 reached a settlement that included union recognition and wage increases.

Today, educators would do well to remember the lesson of the power of fusing civil rights movements with labor activism.  As public education and teachers come under increasing attack by corporate education reformers, educators today are being forced to defend their very humanity.

Well-funded but non-accountable organizations, such as the Broad Foundation and the Bill and Melinda Gates Foundation, have invested their wealth to promote the policies of “No Child Left Behind” and “Race to the Top”.   These policies that purport to demand teacher accountability but ultimately reduce students and teachers to test scores–data points used to fire teachers, narrow the curriculum, keep students from graduating, privatize education, and close down scores of schools (primarily those that serve Black, Latino and students of color) across the nation.

In a particularly inhuman attempt to transform living, breathing, teachers into lifeless bits of data, the Los Angeles Times published a 2010 article titled, “Who’s Teaching L.A’.s Kids?”, which provided rankings of some 6,000 teachers  according to student test data and sorted them into the categories of “Most effective, more effective, average, less effective, or least effective.”  One LA public school teacher described the brutality of the LA Times’ publishing of her test scores, saying it made her feel “like I was on public display, like a human being on the auction block or something.”  LA educator, Rigoberto Ruelas, a popular fifth-grade teacher in a Los Angeles’ Miramonte Elementary, committed suicide soon after the publication of his test scores labeled him “less effective.”  Suicide rarely has a single cause, and is usually is the result of many socially preventable hardships, but friends reported that Ruelas had been distraught specifically because of his public shaming over the test scores of his students.

It is astounding and shameful that the bankers who sabotaged the global economy–which exacerbated the social conditions and lack of opportunity that contributed to the underperformance of Rigoberto’s students–remain free from persecution, yet public shaming of our educators is celebrated as “accountability” and the key to the betterment of the nation. 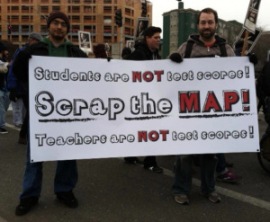 However, a new movement is emerging across the country to assert that teachers and students are more than a test score and that the intellectual process of teaching and learning cannot be measured, or inspired, by bubbling answer choice “E.”  In the first months of 2013 alone, Seattle teachers have launched a historic boycott against the MAP test, students in Portland have walked out of school in protest of the standardized OAKS exam, students in Chicago have staged a walkout against the both standardized testing and school closures, hundreds of parents in Long Island have opted their children out of a high stakes test, and some 10,000 parents, students, and educators in Texas have rallied against the over use of testing in the public schools.

As our movement develops, it would do well to advocate an alternate vision for education that is, as Paulo Freire asserted, to liberate our young people from oppression, rather than to make the United States more competitive in the global economy. This is a vision of education where the purpose is to develop social responsibility, creativity, leadership, and critical thinking—skills young people will need to challenge the dire problems we face today such as war, mass incarceration, economic collapse, and climate change.

6 thoughts on “Jesse Hagopian’s new website: I AM AN EDUCATOR”