This was originally posted on Common Dreams.

Chalk in one hand and a handgun in the other. 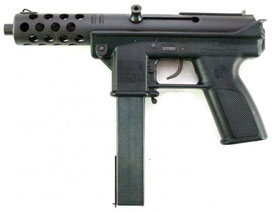 As a high school history teacher with a Masters in Education, I never imagined some politicians and other cultural “leaders” would be urging me to add “special forces” to my title.

Tec-9’s for Teachers?And yet in response to the tragic mass shooting last week at Sandy Hook Elementary School in Newtown, Connecticut, Del. Robert G. Marshall (R-Prince William) put forward a bill to the Virginian legislature that would require some teachers or other school staff to carry concealed weapons in schools. Texas Gov. Rick Perry (R) said that teachers with licenses to carry concealed handguns should have “access to weapons in their school.” At least seven states—Florida, Minnesota, Oklahoma, Oregon, South Carolina, South Dakota and Tennessee—have lawmakers who have outlined plans to introduce legislation to allow teachers to carry guns into schools or require several teachers to be armed in school buildings.

Expectations and extra duties for teachers have piled up in recent years—and as budget cuts mount we have increasingly been asked to serve as therapists, career councilors, janitors, secretaries—but now are they really asking us teachers to take on yet another role: member of a SWAT team?  What’s next? Merit pay for the crack shot on the faculty?

The first thing people should know before they propose that Mr. Rambo teach geometry is that teachers don’t get enough sleep to carry loaded weapons to school. With my 150 students a day, 90 essays to grade per week, dozens of e-mails from parents to answer, college letters of recommendation to write, permission slips to sign, curricula to plan, and afterschool tutoring to help with, sometimes little details can slip through the cracks—like, maybe, putting the safety on the firearm?

Joining the right-wing bugle call for the militarization of our schools, on Friday the NRA broke their week-long silence on the Newtown massacre by calling for a program to arm and train guards in schools as the solution to gun violence.  Invoking a popular storyline from Marvel Comics, the NRA’s top lobbyist, Wayne LaPierre, said, “The only thing that stops a bad guy with a gun is a good guy with a gun.”

Yet as many have pointed out, there were armed guards at Columbine High School during the massacre in 1999 and they couldn’t stop the two determined gunmen.  Moreover, the calls for more armed security at schools only reinforces the school-to-prison pipeline pattern of pushing students out of school and into the criminal justice system. As Rethinking Schools magazine editorialized,

“As police have set up shop in schools across the country, the definition of what is a crime as opposed to a teachable moment has changed in extraordinary ways…. Early contact with police in schools often sets students on a path of alienation, suspension, expulsion, and arrests. George Galvis, an Oakland, Calif., prison activist and youth organizer, described his first experience with police at his school: ‘I was 11. There was a fight and I got called to the office. The cop punched me in the face. I looked at my principal and he was just standing there, not saying anything. That totally broke my trust in school as a place that was safe for me.”

How deep into the Rabbit Hole of Violence has America managed to burrow? Deep enough so that media as well as multiple governing bodies would allow gun-lobby shills mainstream platforms that make their dangerous ravings seem respectable. Maybe even “reasonable.”  Deep enough so that ideas like getting weapons into the hands of those tasked with nurturing our youth—a strategy so Mad Hatter it would be laughed off the stage or vigorously challenged by the responsible media in any other civilized country—is pondered seriously by pundits and politicians alike.

And yet the recent calls from politicians for gun control, while refusing to address the underlying causes of violence in our society, have been appalling in their own right.

President Obama’s plea for a national dialogue about gun violence was disfigured by cruel irony.  At a press conference in the wake of the Newtown shooting a tearful President Obama said, “As a country, we have been through this too many times…. And we’re going to have to come together and take meaningful action to prevent more tragedies like this, regardless of the politics.” Obama’s grief was real, and yet so too is the grief of the families of the at least 176 children who have been killed by U.S. drones in the name of the “War on Terror.”  As journalist Glen Greenwald wrote, “Consider this irony: Monday was the three-year anniversary of President Obama’s cruise missile and cluster-bomb attack on al-Majala in Southern Yemen that ended the lives of 14 women and 21 children: one more child than was killed by the Newtown gunman.”

New York Mayor Michael Bloomberg’s call for gun control was full of self-righteousness: “Words alone cannot heal our nation. Only action can do that. Gun violence is a national epidemic. I demand a plan. The time for talk is over.”

Yet Mayor Bloomberg oversees a police force, larger than many country’s standing armies, which has a brutal history of gun violence perpetrated against African Americans and people of color.

One of the latest examples was unarmed 18-year-old African-American Ramarley Graham who was shot dead in his own bathroom in front of his grandmother and 6-year-old brother on February 2 by New York police officer, Richard Haste.

Nationally, a recent study revealed that a Black person is killed by police somewhere in the United States every 36 hours.  This unchecked police terror is robbing families of their children, and yet you won’t hear a politician with the bravery to talk about gun control for trigger-happy officers.

The United States is currently engaged in the longest war in our nation’s history—now having devastated Afghanistan for over 11 years, leaving many thousands of Afghanis dead as well as over 2,000 U.S. soldiers.  The nation has spent hundreds of billions of dollars to occupy Afghanistan, yet every single elementary school councilor in Seattle last year was laid off for lack of funds.

Any society that is so completely organized around the idea of killing “the enemy” should not be surprised when some alienated individual redefines the enemy and commits the kinds of horrendous atrocities that our government boasts about committing around the world.

The idea of arming my son’s preschool teacher as a safety measure is unspeakably senseless. So, too, is spending more to bomb schools in the Middle East than to build them at home. If we truly want to work to end killing sprees, rather than just express outrage over the next one, we must address underlying causes of violence in our society.  This would require reorganizing our education system and our society away from  its focus dedication to mass incarceration and endless war, and instead toward collaboration, empathy, and solidarity. A society that marshaled its resources and rallied its people, not to “kill the enemy”, but to provide healthcare, housing, and education, would produce a very different kind of citizen.

We could start by rehiring the elementary school counselors and supporting kids from a young age who need someone to talk with. By investing in social programs and education we could prove, indeed, that the stick of chalk is mightier than the gun.

One thought on “Tec-9’s for Teachers? Arming Educators Gets a Failing Grade”