The Weekly Update for the news and views you might have missed.

We need *you* to provide the people power we need to counter the massive resources of the Yes campaign ($4.7 M and counting. It’s Gates and the Walton’s versus the rest of us.).

Please join People for Our Public Schools this coming Wednesday October 10th for phone banking to defeat Initiative 1240. We need to fund proven solutions for all children first before unproven ideas for just a few!

Be there or be square.

And from our friends Down Under, their view on the privatization of our schools:

One of the comments that I received regarding that post came from a parent in Arizona:

My daughter-in-law is a charter school teacher in Tucson Arizona – as it was the only job she could get as public schools are closing and they are laying off public teachers due to lack of funding. She gets paid only $9 an hour – she is expected to work 10 or so hours  (with no overtime) – clean her classroom (as the Owner of the Charter school does no want to hire a janitor – “too expensive”) AND Charter School teachers are not covered by a Union. The woman who owns the school owns 6 others – and is quite wealthy – THIS IS A BUSINESS MONEY MAKING endeavor — AND they take precious financial resources from the “regular” Public Schools. Vote NO on this Initiative!!

For more about Initiative 1240 and how it would affect our fair state in terms of the Parent Trigger law, see Wayne Au’s article:

“Parent triggers” are one of the latest education reforms gaining traction around the country. They appear to be a simple and empowering reform: If the majority of the parents (50% + 1) at a school sign a petition, they can force restructuring, including conversion into a charter school.

Trigger laws have been passed in California, Texas, Louisiana, and Mississippi and considered in Florida and Pennsylvania. They have even arrived at the movies: 20th Century Fox and Walden Media’s film, Won’t Back Down, revolves around using a trigger to take over a struggling public school.

Despite its inclusion of teachers, this is a classic trigger law, where the slightest majority of the parents or teachers at a school can make a choice for an entire neighborhood institution.

I-1240 would be the country’s most aggressive trigger law. Triggers in other states apply only to failing schools and allow multiple options for restructuring. The I-1240 trigger, on the other hand, could be applied to any school, high or low achieving, and the only option is for conversion to a charter school.

I-1240 also does not require public notice to parents or teachers that a charter conversion petition is being circulated.

Imagine an elementary school with 15 teachers. Eight of them decide to sign a trigger petition to convert their school into a charter. Under I-1240, that’s it. An entire school community could be upended by a handful of people.

Further, once a school is “converted” into a charter, there is nothing in I-1240 to guarantee that parents or teachers have any say-so once the new charter management organization takes over.

Ironically, “parent triggers,” did not start with parents.

The American Legislative Exchange Council (ALEC) has been the primary provider of model language for parent trigger laws. ALEC is the conservative organization behind the “stand your ground” gun laws (which came under scrutiny following the widely publicized shooting death of Trayvon Martin) and voter I.D. laws aimed at reducing the number of eligible voters.

Consistent with ALEC’s policy agenda, trigger laws have been promoted as a way to replace unionized public schools with non-union charter schools, and a way to transfer public school control to non-profit and private management organizations.

Parents have also found parent trigger laws to be disempowering. For instance, parents in one California school have lodged complaints against parent trigger proponents for providing misleading information. Just this summer, after nearly 100 of those parents requested to have their names removed from a trigger petition (pushing the petition below the majority threshold), a California judge ruled that they could not change their minds once they had signed. He proceeded to reinstate the charter conversion against the wishes of the parents.

To read this article in full, go to Rethinking Schools.

Another issue with charter schools is that they have a tendency to close, leaving students and their families in the lurch.  In Florida:

Less than a month before the school year begins, parents of nearly 200 students at a charter school that has closed are scrambling to find new classrooms for their children. Many parents from A.T. Jones Math, Science and Technology Academy could not get answers about the upcoming school year, so they showed up at the school recently. Once there, some were told to leave by security representing Bible-Based Fellowship Church, which opened the charter school next door just two years ago.

The Walton’s, owners of Wal-Mart, have been pushing the privatization of public schools throughout the US and now they’ve made their way to Washington State. One of the backers of this initiative is part of the Walton family, an heiress as she is referred to. The Walton’s do not like unions and in fact ostracize those who try to organize within the ranks of Wal-Mart workers. The Walton’s don’t like the idea of teachers organizing either as seen with their big push to privatize public schools and in the process, attempt to de-unionize teachers altogether. It’s cheaper to run schools that way as it is with their stores.

These are the same folks who want to bring charter schools and eventually vouchers to our state.

The giant retailer had to shut down a distribution facility 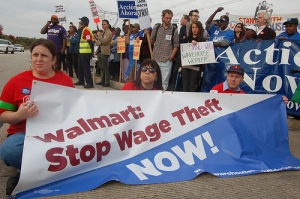 On Monday, 600-plus people marched to Wal-Mart’s vast distribution warehouse in Elwood, Ill., to show support for 30 non-union workers who have been on strike since mid-September. Riot police were called in and arrested 17 people as a group of marchers sat down to block the road to the warehouse. However, in successfully shutting down the facility for the day, strikers and their supporters estimate their protest Monday cost the company several million dollars.

The civil disobedience also brought attention to the strike, which has continued for weeks with no media fanfare. Workers cite unsafe conditions and low wages as fueling their industrial action, along with complaints about long shifts with no breaks and sexual harassment. Micah Uetricht reported for Labor Notes on Monday’s march, the strike and the reasons underpinning it:

At the rally—surely the largest in Elwood history—workers told of backbreaking work for little pay, temperatures that oscillate between sweltering heat and bitter cold, management retaliation, and gender discrimination.

To read this article in full, go to Salon.

Walmart, the nation’s largest employer, has once again come under attack for its labor policies. For the first time in the franchise’s fifty year history, employees from a number of stores have decided to strike over the chain’s anti-union policies.

Do we really want the same people who own Wal-Mart determining education policy for the rest of us? 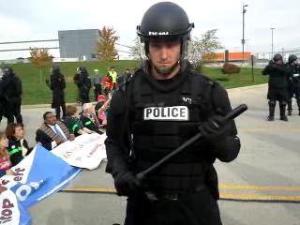 In the category of The Bizarre, check this out: 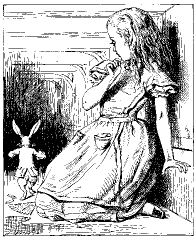 You probably know Duncan as the U.S. secretary of education.  But because he came to Amelie’s to campaign for President Obama,  and because it’s against the law for federal employees to use their official position to influence elections,  the Obama campaign went to great lengths to assure the audience and media that he was not here as the education secretary.

“Please note: The Honorable Arne Duncan will be attending and speaking at this event in his personal capacity on behalf of Obama for America,” a press release said. “Please refrain from using his official title at the event and in related press reports, and note that we will not be taking questions concerning his official responsibilities.

I told my editor they wanted us not to call him education secretary in coverage. We both laughed.

When I arrived at Amelie’s, an Obama staffer intercepted me.  The campaign had been calling our two political reporters,  Jim Morrill and Tim Funk.  Although I was welcome to stay,  the staffer said, it didn’t really make sense for an education reporter to cover this event since it was about the middle class, not education.

I told her I’d stick around.

Meanwhile,  the educators,  parents,  students and activists who had been invited were getting the same  message,  repeatedly.  At one point a campaign staffer standing on a chair asked the group what they were supposed to call Duncan.  “The Honorable Arne Duncan,”  they chorused.

The crew from Generation Nation  —  Providence senior Arjun Gupta,  North Meck junior Sarah Kerman and adviser Amy Farrell  —  asked if I knew what this was all about.  Would they get in trouble if they asked the education-related questions they’d prepared?  Did they need to come up with new ones?  I said I wasn’t sure,  but encouraged them to ask their original questions.

Duncan arrived,  accompanied by guys in suits with wires in their ears.  He spent a couple of minutes talking about his Chicago ties to the Obama family,  then segued into  …  you guessed it.  Education.

Duncan talked about his administration’s cradle-to-career agenda,  the North Carolina reforms being fueled by the federal Race to the Top program,  the Obama administration’s increased spending for Pell grants and the need to invest in education.  He fielded questions from the audience,  including the Generation Nation students.  Every single one was about education.  Duncan’s a pretty down-to-earth guy,  and no one seemed to feel a need to use any kind of title.

The event had been billed as a  “What’s at Stake for the Middle Class Roundtable.”  After Duncan finished,  Obama campaigner Leah Hill made the only clear reference to that theme:  “This is a make-or-break moment for the middle class.”

And if you missed Bill Moyers on ALEC, the organization that is bringing the privatization of public schools to every state possible, you can view it this weekend:

To find out more about how ALEC has affected policy in education around the country, check out ALEC Exposed

Have a good one.

While going through some articles regarding Gates, I found this interesting tidbit.

However, the foundation’s portfolio didn’t give the health of the consumer a ringing endorsement, as it unloaded stakes in both Home Depot Inc. HD +2.36% and Dick’s Sporting Goods Inc. DKS -0.46% .

For the second straight quarter, the foundation also significantly boosted its stake in Grupo Televisa SAB (TV, TLEVISA.MX), adding more than four million shares. It now owns 16.6 million shares valued at $328 million. Overall, the foundation, one of the world’s largest private philanthropy funds, reported holdings valued at $12.7 billion, as of March 31, up from $10.4 billion as of Dec. 31, according to a filing with the U.S. Securities and Exchange Commission.

To read this article in full, go to Market Watch.