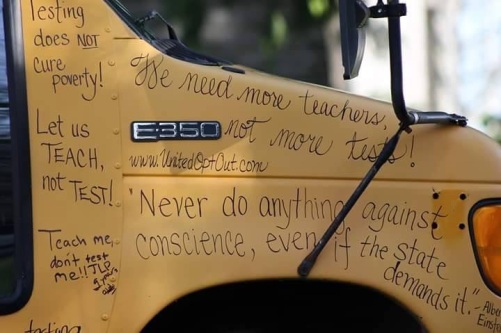 Last week, I opened my Facebook page to an article which explained how the Center for Reinventing Public Education (CRPE), an anti-public education think tank nestled within UW Bothell, is making waves nationally.

As a UW Bothell student in the Masters of Policy Studies program, who signed up for the only “Education Policy” elective offered in my program, I learned first-hand how CRPE views public education, and witnessed first-hand how they conduct their own classroom.

Robin Lake and Betheny Gross, the co-instructors of the CRPE course, presented the argument that business models were more equitable and efficient than traditional public schools, and that the only way to reform education was to dismantle it and replace it with charters that will constantly open and close according to their “results”. The goal was never “better schools overall”. The goal was the ability to close “bad” schools.

These instructors argued the education system is supposed to have mixed results, to compare outcomes (test scores), and shut down “ineffective” schools; they argue that it is good to create a continuous, responsive cycle for “improvement”. They argue that public institutions are too bureaucratic, too slow to change and adapt to the 21st century. Their goal is to privatize public education.

Robin and Bethany, the instructors of the CRPE course, blamed teachers, parents and students in the process of demonizing public education. They didn’t mention the factors of poverty or low school funding, nor did they mention budget cuts or how since Federal education policies from No Child Left Behind, and every version since then, drain resources from public education. According to Robin and Bethany, “money doesn’t make a difference and we need to stop throwing it at education”. When have we ever done this?

That quarter, we read from business models how shutting down and “starting from a clean slate” was the best way to turn around failing businesses. We did not read a single piece of educational literature that did not come directly out of CRPE. I was shocked.

I raised concerns over issues of equity and standardization. They dismissed my concerns as being unsupported, non- issues or able to be solved by Charter Reform. At the end of the quarter we were asked to present one of our final two projects. Most of my colleagues chose to regurgitate the arguments made in class readings (some to save their grade, others because it was the first Ed policy class they took and the only information they had to draw from). I took a moderate stance on a paper that briefly included issues within high stakes exams and the need for multiple measures of intelligence.

I would have been open to any form of critical feedback, both positive and negative. The only response I received; however, was “Nice try but it will never work on a national scale”. Then, I saw a week later how my grade was negatively impacted by my substantiated and researched views. I received the lowest possible grade accepted by my program. No feedback on my work except for “Nice try…”. I was stunned. I did the work. Education Policy was my specialization.

I bring up this anecdote because it highlights a significant learning opportunity in my graduate education. I care much less about grades, than I do feedback. And that was the problem.

I realized the way these instructors defined democratic participation (both in educational reforms and the way they conducted their classroom), was by offering choices created by “experts”; rather than increasing the participation of stakeholders. Their evaluation methods also reflected the disproportionate value they placed on “absorbed information”, not ability to think critically, find information, interpret information and disseminate it to my colleagues within the framework of the course. They didn’t engage with competing perspectives and grade a body of work. They rated students according to their worldview.

I question why a research based program, UW Bothell, is allowing lecturers from a think tank intent on dismantling public education, to teach future educators and policy makers.

There was limited oversight or accountability for how they chose to deliver information. They had full control over grading practices, were not hired on as professors, assistant professors or lectures. They were given a title of “instructor” and allowed to teach without observation of a faculty member. We were given office hours for the Director of the MAPS program and a survey at the end of the quarter. There was no other oversight to prevent them from retaliating against students. I’ve taken classes by people in the pro- charter camp before. But they conducted themselves as professionals capable of entertaining competing perspectives, provided critical feedback and graded based on quality of work and participation.

All of the students from that class are working in our education now. We are making decisions that impact the lives of students and families across the state and nation. Some of us had exposure to enough competing perspectives to challenge the idea that public dollars should be taken away from schools and given to a private marketplace. Some didn’t. So as I read about how they are shaping the educational landscape nationally, I really understand how their views as course instructors have shaped the perspectives, and educational outcomes of professionals working in our own backyard.

Taking the course taught by CRPE’s researchers was one of the most eye opening learning opportunities I have ever had. Comparing their research methods, ideologies and classroom culture to the courses I took to earn my undergraduate and graduate degrees, I was struck by their narrow views and how they wouldn’t entertain any views outside of their own.

I don’t doubt that these two upper middle class white women care a great deal about children like theirs. I do doubt CRPE’s ability to question their unwavering faith in Neo-Liberal Market reform.

How material is taught is just as important as the curriculum itself. Does the instructor value debate as a tool of learning? Or is repetition of subject material the leading indicator of learning?

I recall watching “Waiting for Superman” in previous classes. This video is a popular marketing tool for Charter Reformers. One of the central arguments of the video, is that students are currently taught as passive recipients of knowledge. Where the teacher is the ultimate authority and attempts to “dump” knowledge; rather that teaching students to engage with material.

If the fundamental argument of Charter reformers is that you can break up the “bureaucracy” and “monopoly” of public ed so that teachers are able to engage with students; why are their reformers teaching in the very authoritarian style they critique?