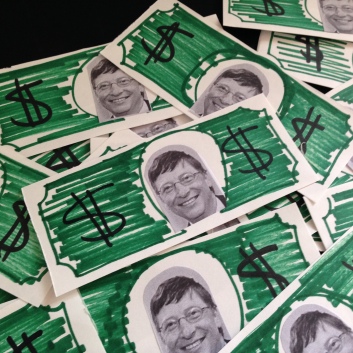 The quality of stating concepts one wishes or believes to be true, rather than the facts.

In spite of being handicapped by attending two outmoded, “factory style”  public schools, both my kids have managed to learn that if you make a claim in an essay you must back it up with credible evidence.

This is what Bill Gates had to say about the marvels of Facebook’s Basecamp a personalized learning platform used by Summit Sierra Charter School in Seattle:

At its best, personalized learning doesn’t just let students work at their own pace. It puts them in charge of their own academic growth. Summit, the network of charter schools that Summit Sierra belongs to, worked with Facebook to develop software that guides the students’ learning. For example, you might set a goal like “I want to get into the University of Washington.” Working with their teachers, the students develop a personalized learning plan in the software. They can see all the courses they need to meet their goal, how they’re doing in each class, and what it will take to get a given grade. They set weekly objectives and note their progress in the software.

Free Meaning The Gates Foundation Gave One Million To Make it Possible.

Here’s the first bit of truthiness:

A personalized learning plan like the one I saw at Sierra would’ve taken the mystery out of things. After my visit, I emailed Mark Zuckerberg at Facebook to tell him how great it is that their engineers are working on this project. (Summit is making the platform available to other schools for free.)

Actually, The Gates Foundation awarded Summit “Public” Schools over a million dollars so Summit could provide Facebook’s Basecamp to their partner schools for free. It’s interesting that Gates doesn’t mention how his Foundation made it all possible.

Has Bill Gates Been in a Real Classroom with Actual, Human Teachers?

I’m not sure if the next two paragraphs are an example of truthiness or just how out of touch Bill Gates is with what actually goes on in real classrooms.

Any parent who has had the opportunity to volunteer knows “connecting one-on-one” is what human teachers do day-in and day-out.

I would bet most teachers would argue that making these connections is really what teaching is all about. It’s shocking to me that Bill Gates doesn’t understand this.

Personalized learning represents a big shift for teachers too. As most will tell you, it’s rare to find a school that gives them the opportunity to connect one-on-one with their students. But in personalized learning, that’s not the exception, it’s the rule.

For example, Summit teachers are matched with students whom they will mentor for all four years in school. During my visit, teacher Aubree Gomez showed me how it works. First she took out her laptop, pulled up a list of the 17 students she’s mentoring, and explained how the software showed her what each student was doing, down to the level of which lessons they had looked at and which tests they had taken.

The idea that a professional teacher needs some type of intermediary software to manage a portfolio of students is equally bizarre.

It only makes sense to me if children are viewed as tiny slivers of skill-based competencies to be managed by impersonal algorithms – kids as commodities – rather than valued as the complicated human beings all children are.

Evidence? Who Needs it.

First, Gates cites a study from the Rand Corporation as evidence that personalized learning works, but later admits, there really isn’t a lot of solid evidence to prove it.

We still need more data about the strengths and weaknesses of personalized learning, but the results so far are promising. One study found that among 62 schools using personalized learning, students made more progress in two years than their peers at other schools. They started below the national average in reading and math; two years later, they were above it.

To be fair, we don’t know yet how much of this improvement is due to personalized learning, versus other good things these schools are doing. And in any case, personalized learning won’t be a cure-all. It won’t work for all kids at all ages, and it’s just one model among many promising ones. But I’m hopeful that this approach could help many more young people make the most of their talents.

Turns out, Rand isn’t a very credible source when it comes to personalized learning. In fact, The The Institute for the Future (IFTF), which is an outgrowth of The Rand Corporation, is an active promoter of personalized learning, blockchain, and the gig economy. Check out the video.

Gates may have reached peak truthiness with his flippant “to be fair” dismissal of his lack of evidence to support the effectiveness of personalized learning; but here’s something to think about: there’s almost no evidence showing online or the classroom equivalent, competency-based learning, to be effective.

The Online Charter Study produced by CREDO and The Center for the Reinvention of Public Education found negative academic growth for students enrolled in online charter schools as compared to their peers in traditional public schools.

How bad was the negative impact?

For math, online charter students lost the equivalent of 180 days of learning. Reading faired somewhat better, with a lost equivalent of 72 days. 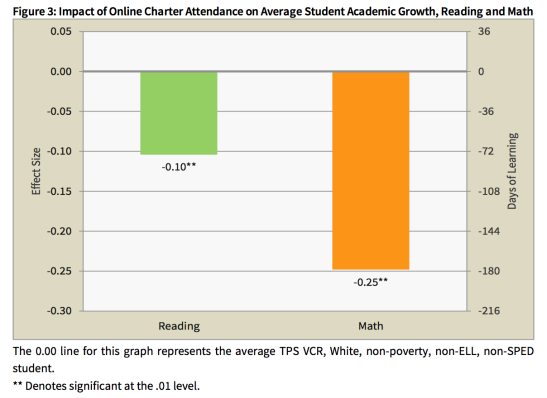 The NEPC Virtual Schools Report 2016 has more specific information on the performance of the blended instruction model.

Here’s a few of the highlights:

Multiple or expanded measures of school performance reveal that virtual school outcomes continued to lag significantly behind that of traditional brick-and-mortar schools. Blended schools tended to score even lower on performance measures than virtual schools, although this may be influenced by the fact that blended schools serve substantially more low-income students.

Blended schools’ on time graduation rates were half ( 37.4% ) the national average.

This interesting bit was buried in the study’s conclusion.

The rapid expansion of virtual schools and blended schools is remarkable given the consistently negative findings regarding student and school performance. The advocates of full-time virtual schools and blended schools remain several years ahead of policymakers and researchers, and new opportunities are being defined and developed largely by for-profit entities accountable to stockholders rather than to any public constituency.

Both came to the same conclusion: the tech behind competency-based learning has advanced, but the concept itself has not benefitted from these technical improvements and the educational outcome for students remain unimpressive.

From the study, Competence-Based Education and Educational Effectiveness:  A critical Review of the Research Literature on Outcome-Oriented Policy Making in Education.

From the study, New Interest, Old Rhetoric, Limited Results, and the Need for a New Direction for Computer-Mediated Learning.

The pace of technological advancement, combined with improvements technology has brought to other sectors, is leading policymakers and educators alike to take another look at computers in the classroom, and even at computers instead of classrooms. In particular, advances in computational power, memory storage, and artificial intelligence are breathing new life into the promise that instruction can be tailored to the needs of each individual student, much like a one-on-one tutor. The term most often used by advocates for this approach is “Personalized Instruction.” Despite the advances in both hardware and software, recent studies show little evidence for the effectiveness of this model of integrating technology into the learning process.

The Failed State of American Democracy

Sheldon Wolin wrote in Democracy Incorporated about inverted totalitarianism, the state of affairs where democratic institution are hallowed out and replaced with top down authoritarian systems ruled by money and a powerful elite. The institution remains, in name only, while the shadow parallel system holds the real power.

Wolin explains the process in detail in this article for The Nation:

Representative institutions no longer represent voters. Instead, they have been short-circuited, steadily corrupted by an institutionalized system of bribery that renders them responsive to powerful interest groups whose constituencies are the major corporations and wealthiest Americans. The courts, in turn, when they are not increasingly handmaidens of corporate power, are consistently deferential to the claims of national security. Elections have become heavily subsidized non-events that typically attract at best merely half of an electorate whose information about foreign and domestic politics is filtered through corporate-dominated media. Citizens are manipulated into a nervous state by the media’s reports of rampant crime and terrorist networks, by thinly veiled threats of the Attorney General and by their own fears about unemployment. What is crucially important here is not only the expansion of governmental power but the inevitable discrediting of constitutional limitations and institutional processes that discourages the citizenry and leaves them politically apathetic.

Bill Gates and Mark Zuckerberg’s team up to promote personalized learning is a perfect example of the hallowing out and replacement of the democratic structures tasked with overseeing our public schools.

In a statement, an initiative spokeswoman expressed similar sentiments.

“The Chan Zuckerberg Initiative is excited to partner with the Bill & Melinda Gates Foundation to support New Profit’s work,” the statement says. “We share an interest in seeing significant improvement in education and are committed to learning from each other.”Since 2009, the Gates Foundation has given more than $300 million to support research and development on personalized learning, including past grants to New Profit totaling about $23 million. (Education Week has received support from the foundation in the past for the newspaper’s coverage of personalized learning.)

The Chan Zuckerberg Initiative, meanwhile, was launched in 2015. Zuckerberg and Chan said then they intended to give 99 percent of their Facebook shares—worth an estimated $45 billion—to a variety of causes, headlined by the development of software “that understands how you learn best and where you need to focus.”

The Chan Zuckerberg Initiative is not a traditional nonprofit foundation. Instead, it’s an LLC. That organizational structure allows for direct investment in for-profit companies and political lobbying and donations, as well as philanthropic giving. It also limits the extent to which the group is legally required to publicly report on its activities.

So far, The Gates Foundation has given $300 million of support to promote and develop personalized learning – with more likely to come.

Now the Chan Zuckerberg Initiative is adding “99 percent of their Facebook shares—worth an estimated $45 billion” to the mix.

This is enough money to overpower and colonize any system, democratic or private.

Add to that the shielding power of an LLC designation – which will keep the public’s prying eyes far away from the inner working this partnership – and we’re suddenly facing a serious democratic crisis in the fight to save public education.

No wonder Bill Gates prefers half-truths and lies of omission rather than full disclosure when it comes to Summit, the Chan Zuckerberg Initiative, and personalized learning.