Cory Booker and the $100M gift to Newark Public Schools

This goes into the OMG category because that is what I kept saying to myself as I read this article.

It started on Oprah.

Facebook founder and Winklevii nemesis Mark Zuckerberg announced a $100 million donation to Newark schools to blunt PR damage from the release of The Social Network to help school children. The money would not be going into the struggling city’s budget but would be privately controlled with Newark Mayor Cory Booker providing guidance.

Yes, money used to transform Newark public schools would be administered privately and, until recently, in secret from the people of Newark.

Privatizing schools in Newark was already a tough task this year after the crown jewel of charter schools in the city was caught up in a cheating scandal. Apparently telling teachers they get paid more/remain employed if their students do better on tests leads to gaming the test system – who knew monetary incentives lead to the pursuit of self-interest? The strategy was clear, use the private money to launch attacks on public schools and keep anyone from seeing how.

That last part of the strategy just hit the wall. The American Civil Liberties Union won a lawsuit forcing the release of emails between Mayor Booker and Facebook executives:

NEWARK – A Superior Court judge has ordered the City of Newark to release emails that were exchanged about the $100 million pledge that Facebook founder Mark Zuckerberg made to Newark schools in September 2010.

The ruling was issued in response to a lawsuit filed by the American Civil Liberties Union of New Jersey (ACLU-NJ) on behalf of the Secondary Parent Council (SPC), a group of Newark parents and grandparents seeking more transparency about the donation.

There is an interesting twist here as the Booker administration originally claimed there were no emails.

The city originally stated it did not have any documents about the donation. It later admitted in a January court hearing that emails existed, but argued they did not have to release them because they were shielded by mayoral executive privilege, contain personal information and are deliberative in nature. The city also argued Newark Mayor Cory Booker was not acting in his official capacity as mayor when he accepted Zuckerberg’s pledge on the Oprah Winfrey show.

Judge Rachel N. Davidson rejected all those arguments, noting for instance that a press release on the City of Newark’s own website touts Booker’s involvement in the donation as mayor and that all of the emails in dispute are maintained by Booker’s executive assistant in Newark City Hall. The judge also noted that Booker’s role as mayor is repeated in statements about the donation that are mentioned on his campaign website, as well as in some of the emails that are being sought.

As for the emails themselves they show the typical anxieties and pathologies of corporate executives and politicians when embarking on any hostile takeover, as reported by The Wall Street Journal:

In the days leading up to the announcement of a $100 million gift to Newark schools Facebook’s COO Sheryl Sandberg and Newark officials identified three areas that could be hurdles to a smooth implementation: building community support, attracting other donors and hiring a new superintendent…

A week before the September 2010 donation was public, Sandberg asked Booker in an email about spending plans for the first 100 days and details of how the mayor planned to obtain support from residents.

Booker wrote: “This is one of our biggest concerns right now as we must be ahead of the game on community organizing by next week.” A mayoral adviser outlined a rough plan to spend $315,000 on efforts such as polling, focus groups, mailing and consultants. The foundation has spent at least $2 million on such efforts since.

Newark residents who are critical of Booker at school board meetings often say they are wary of outsiders and would rather have a superintendent who has some connection to the city. Sandberg appears to have been concerned about how the gift would be viewed. In an email to Booker and other Newark officials, she wrote that a draft of a press release about the donation used “too much ‘national’ language.”

“I wonder if we should basically make this focused on Newark with just a touch of ‘and this will be a national model,’” she wrote.

The irony is rich – even the corporate executive trying to market philanthropy for brand benefit thinks the plan is not local enough. If only Sandberg knew Booker was getting ready to ditch Newark for higher office, then maybe she would realize it was never about Newark and all about Cory Booker sucking up to his donors on Wall Street.

About the Bradley Foundation: 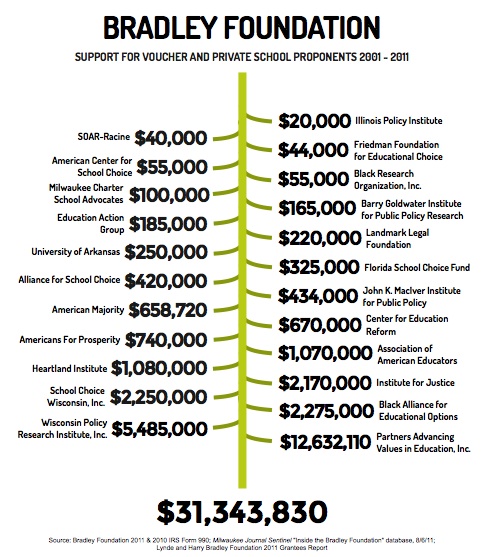 For a full list of groups the foundation has funded, please see Contributions of the Bradley Foundation.

Harry Bradley was one of the original charter members of the far right-wing John Birch Society, along with another Birch Society board member, Fred Koch, the father of Koch Industries‘ billionaire brothers and owners, Charles and David Koch.

According to the Milwaukee Journal Sentinel, “from 2001 to 2009, it [Bradley] doled out nearly as much money as the seven Koch and Scaife foundations combined.”

Governor Scott Walker signed a right-to-work bill into law on March 9, 2015 with some help from the Bradley Foundation. The foundation “doled out over $8 million in 2012 and 2013, the latest years for which information available, to support the operations of a web of nearly three dozen groups promoting right to work laws and radical privatization policies that empower the wealthy and corporate CEOs at the expense of the middle class,” according to a report by One Wisconsin Now published on February 25, 2015. “TheBradley Foundation, having nearly half a billion dollars in assets, regularly hands out $30-40 million a year, making it perhaps the largest right wing funding foundation in America. Groups operating in Wisconsin, including the MacIver Institute, the Wisconsin Policy Research Institute, the Wisconsin Institute for Law and Liberty, Media Trackers and theWisconsin Manufacturers and Commerce Foundation, took in excess of $2.9 million.[7]

Walker proposed his 2013-2015 budget, which contained plans to massively expand Wisconsin’s school voucher program, in February 2013. Congruent with the efforts of the Bradley Foundation and the American Legislative Exchange Council (ALEC), this would provide state subsidies for students to leave public schools in exchange for private schools, effectively transfering substantial government public education funding to the private sector.

The Center for Union Facts, an anti-union organization that is part of lobbyist Rick Berman‘s family of front groups, received $1.55 million between 2007 and 2010 from the Bradley Foundation and spent heavily to support Walker and smear teachers unions with an anti-union website during the 2011 fight over public sector collective bargaining rights.

For additional information on the Bradley Foundation, go to Source Watch.

2 thoughts on “The Black “Mis-Leadership” Class Including Cory Booker”