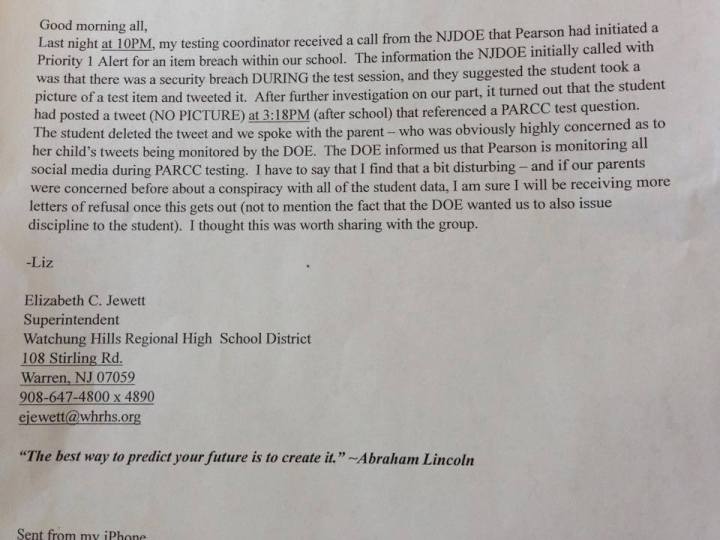 One motivation is clear–the more students who take the test, the more Pearson gets paid. This explains a lot about the state’s and the company’s aggressiveness in ensuring as many students as possible take the test.

I haven’t heard any confirmation that students in Washington State are being watched via social media but be aware it is happening in other states.

“The DOE informed us that Pearson is monitoring all social media during the PARCC testing.” Jewett continued: “I have to say that I find that a bit disturbing–and if our parents were concerned before about a conspiracy with all of the student data, I am sure I will be receiving more letters of refusal once this gets out.”

Pearson, the multinational testing and publishing company, is spying on the social media posts of students–including those from New Jersey–while the children are taking their PARCC, statewide tests, this site has learned exclusively. The state education department is cooperating with this spying and has asked at least one school district to discipline students who may have said something inappropriate about the tests. This website discovered the unauthorized and hidden spying thanks to educators who informed it of the practice–a practice happening throughout the state and apparently throughout the country.

The spying–or “monitoring,” to use Pearson’s word–was confirmed at one school district–the Watchung Hills Regional High School district in Warren by its superintendent, Elizabeth Jewett. Jewett sent out an e-mail–posted here– to her colleagues expressing concern about the unauthorized spying on students.

She said parents are upset and added that she thought Pearson’s behavior would contribute to the growing “opt out” movement. So far, thousands of parents have kept their children away from the tests–and one of the reasons is the fear that Pearson might abuse its access to student data, something it has denied it would do.

In her email, Jewett said the district’s testing coordinator received a late night call from the state education department saying that Pearson had “initiated a Priority 1 Alert for an item breach within our school.”

The unnamed state education department employee contended a student took a picture of a test item and tweeted it. That was not true. It turned out the student had posted–at 3:18 pm, well after testing was over–a tweet about one of the items with no picture. Jewett does not say the student revealed a question. There is no evidence of any attempt at cheating.

Jewett continues: “The student deleted the tweet and we spoke with the parent–who was obviously highly concerned as to her child’s tweets being monitored by the DOE (state education department).

“The DOE informed us that Pearson is monitoring all social media during the PARCC testing.” Jewett continued: “I have to say that I find that a bit disturbing–and if our parents were concerned before about a conspiracy with all of the student data, I am sure I will be receiving more letters of refusal once this gets out.”

The school superintendent also expressed concern about “the fact that the DOE wanted us to also issue discipline to the student.” Clearly, if Pearson insists on claiming test security as a justification for its spying on young people, that reasoning is vitiated by its cooperation with the state education department in trying to punish students who are merely expressing their First Amendment right to comment on the tests.

She wrote: “In reference to the issue of PARCC infractions and DOE/Pearson monitoring social media, we have had three incidents over the past week. All situations have been dealt with in accordance with our Watchung Hills Regional High School code of conduct and academic integrity policy. Watchung Hills Regional High School is a relatively small district and a close-knit community; therefore, I am very concerned that whatever details your sources are providing may cause unnecessary labeling and hardship to students who are learning the consequences of their behavior.”

Jewett acted professionally, I believe, but I must point out the irony of her lecturing me about protecting the identity of students when she has just dealt with both an inexcusable breach of privacy involving minors and an attempt by state government to punish dissent. I made it clear to her I have no intention of revealing names of students–but I would be more than happy to speak with their parents.

The state education department official identified as the person cooperating with Pearson is Veronica Orsi, who is in charge of assessment for grades 9-12 in the department. She refused to answer this website’s questions about her involvement and passed them on to superiors who also did not answer.

Neither the state education department nor Pearson’s would respond to my emails on the company’s spying on students. New Jersey is paying $108 million to run its PARCC testing program, an enterprise that has engendered opposition throughout New Jersey–and that was before the spying was revealed.

One motivation is clear–the more students who take the test, the more Pearson gets paid. This explains a lot about the state’s and the company’s aggressiveness in ensuring as many students as possible take the test.

But what isn’t explained is the willingness of the state education department to punish New Jersey children on behalf of a private company. According to sources–and not denied by Jewett–state officials tried to have the students involved suspended.

State Education Commissioner David Hespe spent hours testifying before the Legislature’s Senate Education Committee Thursday but did not once mention the possibility that the London-based Pearson would be “monitoring” the social media accounts of students taking the test. Jewett’s email, however, indicated the department–presumably including Hespe–were well aware of the practice.

A few days earlier, state education department officials–including Orsi–held a background briefing for some media–Bob Braun’s Ledger was not invited–and none of the mainstream media accounts of the session revealed the Pearson spying program.

Testing is scheduled for this month and May. Passing or failing the test has no consequence for the students who take it. PARCC does not serve as a graduation test. It can, however, be used in the evaluation of teachers.

UPDATE: The Washington Post’s Valerie Strauss picked up the story and managed to get Pearson to comment:

“The security of a test is critical to ensure fairness for all students and teachers and to ensure that the results of any assessment are trustworthy and valid. We welcome debate and a variety of opinions. But when test questions or elements are posted publicly to the Internet, we are obligated to alert PARCC states. Any contact with students or decisions about student discipline are handled at the local level. We believe that a secure test maintains fairness for every student and the validity, integrity of the test results.”

The Washington Post also posted a letter written by Jewett:

On Friday, March 13, 2015, Bobbraunsledger.com published a story referencing an email I had sent to other superintendents about issues regarding PARCC testing and Pearson’s monitoring of social media. The email shown in his article is authentic. It was an email I sent on March 10, 2015 at approximately 10:00AM to a group of superintendents to share my concerns and to see if other schools had a similar experience. I did not authorize the release of this email nor am I aware of who did release it. I am also not aware of the motives they may have had behind the release. That said, I completely stand behind my comments as they represent not only my views and concerns; they also represent the views and concerns of our Board of Education.

The article references instances involving students during PARCC testing and any related disciplinary action. For student privacy issues, we cannot comment on any of the specific students or discipline referred to in the article. What I am able to share is that all issues have been dealt with in accordance with our Code of Conduct, Academic Integrity and Acceptable Use of Technology Policies.

Our main concern is, and will always remain, supporting the educational, social and emotional needs of our students. The privacy and security of student information remains the utmost priority for our district.

The district will have no further comment on this matter at this time.

That one or more students may have been suspended for treating PARCC like the bad joke it has become shows how sad–and maybe scary–this cooperation between government and the private testing industry has become.