Julie Woestehoff, who is Executive Director of PURE and a founding member of Parents Across America, developed this fact sheet regarding standardized testing. 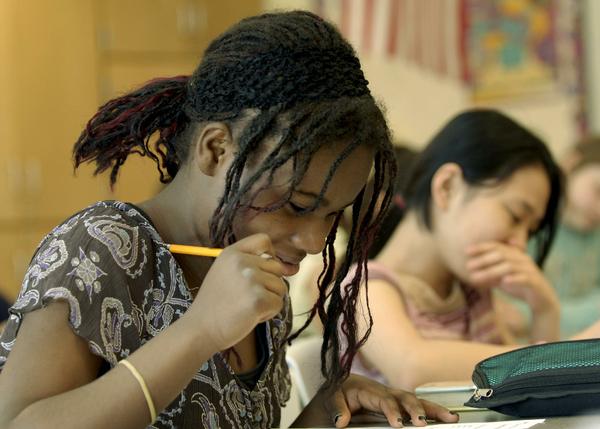 They are designed to rank and sort children. Many use a scoring system in which half of all children in the nation always score below average.There is a well-known achievement gap between the test scores of white and Asian students and African-American and Latino students. Rather than help all children achieve, this overemphasis on standardized tests simply labels more minority children and their schools as failures.

Standardized tests can be biased. A study by Jay Rosner in 2002 showed that sample questions which were answered correctly by more African-American students were not chosen for use in the tests; this was done so that test results – showing African-Americans scoring lower than whites – would be “consistent” from year to year (more on this research and test bias below).

Tests always contain errors. The fact that most of these tests are kept secret from the community makes it likely that even more mistakes happen – we just never find out about them.

Overemphasis on standardized tests can lead to a dumbed-down curriculum. These tests are made up mostly of multiple choice and short answer questions which can’t and don’t measure higher-order thinking, creativity, speaking or artistic skills, or many other important areas our children need to learn about. Unfortunately, areas which are not tested are becoming less and less a part of school, especially under the pressure of NCLB.

Although in recent years test makers have attempted to address concerns about test bias by establishing review committees to “scour” the tests for bias, and by using statistical procedures, significant problems remain in the content of the questions, the cultural assumptions inherent in the “wanted” answers, etc. Here are just a few examples:

Discriminatory item selection: Jay Rosner, executive director of the Princeton Review Foundation, which provides test preparation programs for the college-entrance Scholastic Aptitude Test (SAT), reported in 2003 that potential SAT questions which are answered correctly more often by black students than white students are rejected by the test makers. This was apparently done to assure that test results (showing African-Americans scoring lower than whites) would be “consistent” from year to year.

Outright racism: A series of questions on the 2006 global history New York State Regents exam asked students to describe how Africa “benefited” from imperialism. Using this 150-year-old quote: “We are endeavoring … to teach the native races to conduct their own affairs with justice and humanity, and to educate them alike in letters and in industry,” students were asked to name “two ways the British improved the lives of Africans.”

Accidental (?) bias: In 2001, the Illinois Standards Achievement Test (ISAT) included a reading passage taken from Ann Cameron’s book, More Stories Julian Tells. The book is about an African-American family and is familiar to many African-American children, but the illustrations showed a white family.

Lack of cultural awareness: A Latina “bias reviewer” caught this item while reviewing questions prepared for the Iowa Test of Basic Skills. “I remember one question that showed a picture of a couch on a porch and asked, ‘What doesn’t fit?’ ” she says. “I started laughing…the way I grew up, everyone had a couch outside.”

Watch for the increasing use of “feeling” questions which supposedly evaluate the student’s ability to construct meaning from the text but may also evoke a wide variety of life experiences resulting in “wrong” answers.