Another busy week in the world of education so let’s get started.

First up, Arne Duncan gets mic checked in Austin.

Go Occupy Austin! and the Parents Across America affiliate, Coalition SAUS (Strengthen Austin Urban Schools), who participated in the event.

And while you’re at it, you can order your very own Dump Duncan mug and have a cup of joe while enjoying this video run over and over again.

Then there is the #TheActionProject – High School Students Changing Public Education making their voices heard. They have a 10-point plan to fix public education:

This is who they are as described on their Facebook page:

We are a group of young activists called The Resistance from a youth arts organization: The DreamYard A.C.T.I.O.N Project. We focus on the issues in our society and with art, activism and organizing we try to change them. Our current topic is Quality Education. We, students in the South Bronx, are being deprived of a Quality Education and we hope that you will join us in our fight for Quality Education.

This teacher evaluation nonsense based on student test scores is going to cause many of our best teachers to look elsewhere for employment. And Seattle, if we’re not vigilant, it will be coming to our town soon. It’s on it’s way in terms of the teacher evaluation bill that Governor Gregoire just signed which places a large part of a teacher’s evaluation on “student progress”. If they base it on the MAP test, we’re all in trouble. More to follow on that. For now, let’s hear from others who are going through the process as we speak and let’s hope that we can learn from the mistakes of others.

First, a teacher in Manhattan. From the New York Times, Evaluating New York Teachers, Perhaps the Numbers Do Lie:

No one at the Lab Middle School for Collaborative Studies works harder than Stacey Isaacson, a seventh-grade English and social studies teacher. She is out the door of her Queens home by 6:15 a.m., takes the E train into Manhattan and is standing out front when the school doors are unlocked, at 7. Nights, she leaves her classroom at 5:30.

“She’s very dedicated,” said Tejal Bahtt, a fellow teacher. “She works way harder than I work. Yesterday I punched in at 7:10 and her time card was already there.”

Last year, when Ms. Isaacson was on maternity leave, she came in one full day a week for the entire school year for no pay and taught a peer leadership class.

Her principal, Megan Adams, has given her terrific reviews during the two and a half years Ms. Isaacson has been a teacher. “I know that this year had its moments of challenge — you always handled it with grace and presence,” the principal wrote on May 4, 2009. “You are a wonderful teacher.”

On the first day of this school year, the principal wrote, “I look forward to being in your classroom and seeing all the great work you do with your students,” and signed it with a smiley face.

The Lab School has selective admissions, and Ms. Isaacson’s students have excelled. Her first year teaching, 65 of 66 scored proficient on the state language arts test, meaning they got 3’s or 4’s; only one scored below grade level with a 2. More than two dozen students from her first two years teaching have gone on to Stuyvesant High School or Bronx High School of Science, the city’s most competitive high schools.

“Definitely one of a kind,” said Isabelle St. Clair, now a sophomore at Bard, another selective high school. “I’ve had lots of good teachers, but she stood out — I learned so much from her.”

You would think the Department of Education would want to replicate Ms. Isaacson — who has degrees from the University of Pennsylvania and Columbia — and sprinkle Ms. Isaacsons all over town. Instead, the department’s accountability experts have developed a complex formula to calculate how much academic progress a teacher’s students make in a year — the teacher’s value-added score — and that formula indicates that Ms. Isaacson is one of the city’s worst teachers.

To read more on what makes a great, dedicated and talented teacher “bad”or “ineffective” in the eyes of Gates, Klein, Broad and others, go to Evaluating New York Teachers, Perhaps the Numbers Do Lie.

Then we have a special education teacher in Manhattan who also received the same rating based on this same evaluation system. Seattle, beware. 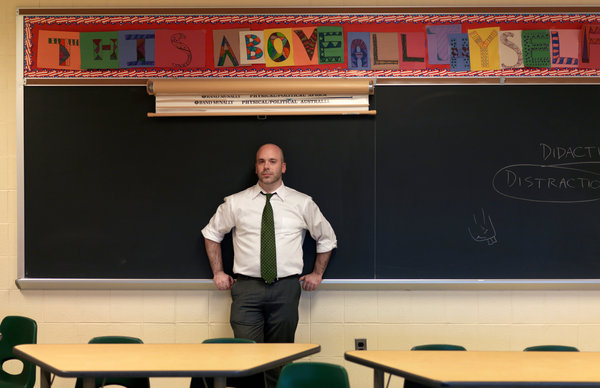 Confessions of a Bad Teacher:

I AM a special education teacher. My students have learning disabilities ranging from autism and attention-deficit disorder to cerebral palsy and emotional disturbances. I love these kids, but they can be a handful. Almost without exception, they struggle on standardized tests, frustrate their teachers and find it hard to connect with their peers. What’s more, these are high school students, so their disabilities are compounded by raging hormones and social pressure.

As you might imagine, my job can be extremely difficult. Beyond the challenges posed by my students, budget cuts and changes to special-education policy have increased my workload drastically even over just the past 18 months. While my class sizes have grown, support staff members have been laid off. Students with increasingly severe disabilities are being pushed into more mainstream classrooms like mine, where they receive less individual attention and struggle to adapt to a curriculum driven by state-designed high-stakes tests.

On top of all that, I’m a bad teacher. That’s not my opinion; it’s how I’m labeled by the city’s Education Department. Last June, my principal at the time rated my teaching “unsatisfactory,” checking off a few boxes on an evaluation sheet that placed my career in limbo. That same year, my school received an “A” rating. I was a bad teacher at a good school. It was pretty humiliating.

I do not put much stock in standardized test scores  except that on a particular day a student shows the capability to focus enough attention on a test question regarding math or reading to answer the question correctly or not. In that light though, the irony has not been lost on me that charter school teachers, based on this sort of evaluation system, performed no better than their public school counterparts in New York City. Read it and weep LEV. 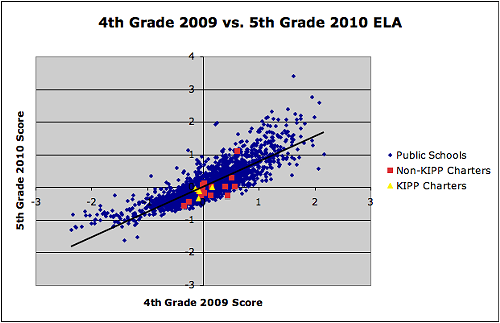 You know that scatter plot I posted yesterday that appeared to show almost no correlation between the “value-added” performance ratings of teachers teaching the same subject to different grade levels in the same year? Well, rather than being completely random, one would have expected it to look somewhat like the graph above, with the data points clustered near a diagonal line rising from bottom-left to top-right.

To read this post in its entirety, go to the SLOG.

Next, an awesome talk by Brian Jones on Racism, Class and the Attack on Public Education on Education Radio.

Below is the introduction:

In this episode we spend the hour listening to a talk by Brian Jones titled “Still Separate, Still Unequal: Racism, Class and the Attack on Public Education.” He was speaking to a group of teachers and parents in New York City this past February as part of Black History Month.

Brian has worked as an elementary school teacher in Harlem and is currently a fourth grade public school teacher in Brooklyn, NYC. Brian participated with the Grassroots Education Movement, GEMNYC, to produce the documentary An Inconvenient Truth Behind Waiting for Superman in 2011. This documentary was a response to the widely publicized film Waiting for Superman, produced by Participant Media, which also produced An Inconvenient Truth. Education Radio episode 5 “Exposing the Myth of Education Reform” from September of last year highlighted Jones’ work on this documentary and can still be heard on our blog.

In his talk, Brian draws connections between attacks on labor and attacks on public schools. He suggests education reformers’ emphasis on test scores, teachers and outcomes is about “excellence” (using their words), but not equity. Brian addresses the increasingly undemocratic process by which these neoliberal reforms are being implemented, and the potential power of true solidarity between parents and teachers.

On @ the chalk face radio this week Tom Slekar and Shaun Johnson talk about the Selma Education Summit and the consensus that came out of the summit that schools have become segregated and unequal with the focus on charter schools for minority students and those schools being about reading and writing with no time for art, PE and other subjects that help round out an individual and prepare them to be world citizens. There is also an interview with the author of the Confessions of a Bad Teacher, William Johnson.

Have a great weekend!

One thought on “Weekly Update: Arne Duncan mic checked, Brian Jones on Racism, Class and Education, and students speak up in South Bronx”