This photo was taken in front of the Gates Foundation in Seattle this week by members of Social Equality Educators.

And so was this “No TFA” photo:

Yesterday was the March 1st National Day of Action for Education in Seattle and in many other parts of the country. There was a march from downtown Seattle to the headquarters of the Gates Foundation on the border of the downtown core.

In front of the Gates Foundation, there was a teach-in, a grade-in and a policy throw-down although I don’t think that Vicki Phillips was able to make it. We will be hearing more on that next week but for now I wanted to share this photograph with you that was taken in front of the offices of Gates and Co. 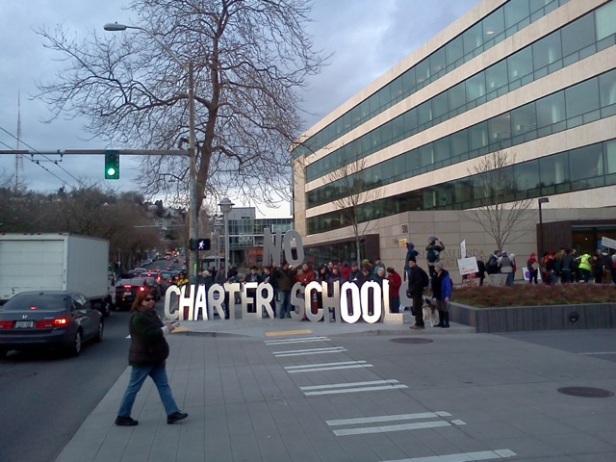 We are fortunate in the state of Washington because we have not had to suffer through what we have seen other students and parents go through in urban areas such as Chicago, New Orleans, New York City, Los Angeles and Florida. We have watched this drama unfold from afar and have been forewarned.

In Chicago, for instance, there is now the travesty of profiteering off of school closures and “turnarounds”. These school turnarounds started with Arne Duncan’s tenure as CFO of the Chicago Public School system and has continued under the new mayor Rahm Emanuel. The school board, all selected by the mayor, voted to close 17 schools in Chicago and convert most of them into charter schools creating additional turmoil and rootlessness for neighborhoods already suffering  the detrimental effects of poverty.

To follow is footage of a Rally for Schools and March on Mayor Emanuel’s House in Chicago. First this footage and then some background on the greed  and callousness that caused this to happen.

There is a for-profit school turnaround company, AUSL, that takes over schools, fires the entire staff including janitors and lunch ladies and turns the school into a charter school. The former president of AUSL was appointed President of the Chicago Public School board by Mayor Emmanuel (Mayor 1% as he is referred to in Chicago). According to Karen Lewis, president of the teachers’ union in Chicago, there were no school turnarounds last year so the impression is now, AUSL needed to make up for lost profits. 17 schools are now to close and be “turned around” into charter schools.

Have we been forewarned adequately Seattle?

This story is on Democracy Now and is a recommended watch, Occupy Education: Teachers, Students Resist School Closings, Privatizations, Layoffs and Rankings.

Here is part of the transcript:

JAISAL NOOR: Right, Amy. So, that report was part of a series I did in Chicago for The Real News and Free Speech Radio News. And these teachers contacted me, current teachers from AUSL, the Academy for Urban School Leadership. It’s this nonprofit private company, this turnaround specialist, who are given schools by the Chicago public school system, where all the teachers are fired, the principals are fired, all the janitors are fired, and this company comes in to hire all new staff and turn around these so-called failing schools.

Now, one of the reasons I went to Chicago was because of this growing outrage against these policies. Protesters were paid to protest for these school closings. That’s how unpopular these policies are. We heard from Latrice Watkins, a parent who organized for months in her community. They created an alternative plan to put forward to the school board. The school board didn’t listen. And this company has very close ties to the Chicago school board. Its former chairman is now the president of the Chicago school board.

JAISAL NOOR: Appointed by Rahm Emanuel last year. So this is a scenario you can’t even make up. The unelected school board voted unanimously to turn several of these schools over to AUSL. And so, it’s current teachers there that are saying things are so bad, there’s no accountability there, that we, as current teachers, who went to the schools as a way to fix education for these communities, disinvested communities, even we think this is failing us. And I know Karen Lewis can talk more about the challenges there.

KAREN LEWIS: So, what happened was, two years ago, they did not give AUSL as many schools as they wanted, and last year they got none. So they had all of these people that they had, quote-unquote, “trained” ready to go to schools, and there were no schools available to them. So when we saw that the president of the board and also the chief operating officer, who came from AUSL, and prior to that, Motorola—so, again, we have this very business-oriented model here—when we saw that they were appointed, we knew this year that AUSL was going to get—I call it AUSL—was going to get a ton of schools.

And now in New Orleans, the city that has been touted as the example for all of us to follow in terms of the privatization of our schools, I would highly recommend listening to PAA Founding Member and eduction activist Karran Harper-Royal, who has a lot to say about charter schools in her hometown. She is being interviewed by Andrea Merida, another PAA Founding Member and parent activist in Denver. The program is A Conversation About Choice in New Orleans.

In the state of Washington there is a “compromise” bill that passed the House and Senate that will tie test scores to teacher evaluations. More to follow on that issue but I wanted to leave you with this conversation that Tom Slekar and Shaun Johnson @chalkface radio had with Florida teacher Ceresta Smith on merit pay based on test scores and the focus on test taking. Ms. Smith gives the straight scoop on teacher evaluations based on test scores, merit pay and why she didn’t deserve what she received in terms of merit pay this year.

Have a great weekend.

4 thoughts on “Weekly Update: March and rally at the Gates Foundation in Seattle, profiteering in Chicago and school “choice” in New Orleans”