This first article by Dave Sirota on how it still boils down to economics in education. See What Real Education Reform Looks Like. Below is an excerpt: 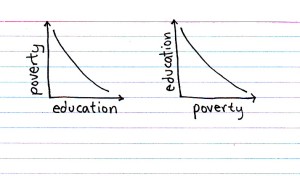 As 2011 draws to a close, we can confidently declare that one of the biggest debates over education is — mercifully — resolved. We may not have addressed all of the huge challenges facing our schools, but we finally have empirical data ruling out apocryphal theories and exposing the fundamental problems.

We’ve learned, for instance, that our entire education system is not “in crisis,” as so many executives in the for-profit education industry insist when pushing to privatize public schools. On the contrary, results from Program for International Student Assessment exams show that American students in low-poverty schools are among the highest-achieving students in the world.

We’ve also learned that no matter how much self-styled education “reformers” claim otherwise, the always-demonized teachers’ unions are not holding our education system back. As The New York Times recently noted: “If unions are the primary cause of bad schools, why isn’t labor’s pernicious effect” felt in the very unionized schools that so consistently graduate top students?

Now, at year’s end, we’ve learned from two studies just how powerful economics are in education outcomes — and how disadvantaged kids are being unduly punished by government policy.

To read the article in full, and it is well worth reading, go to What Real Education Reform Looks Like.

To see the above idea in action, see the article Military Children Outdo Public School Students in the New York Times. There is no RTTT or NCLB, just well fed children enjoying full health care benefits and smaller class sizes. Below is an excerpt:

It has become fashionable for American educators to fly off to Helsinki to investigate how schools there produce such high-achieving Finns. But for just $69.95 a night, they can stay at the Days Inn in Jacksonville, N.C., and investigate how the schools here on the Camp Lejeune Marine base produce such high-achieving Americans — both black and white.

They would find that the schools on base are not subject to former President George W. Bush’s signature education program, No Child Left Behind, or to President Obama’s Race to the Top. They would find that standardized tests do not dominate and are not used to rate teachers, principals or schools.

They would find Leigh Anne Kapiko, the principal at Tarawa Terrace Elementary, one of seven schools here.

Test preparation? “No,” Ms. Kapiko said. “That’s not done in Department of Defense schools. We don’t even have test prep materials.”

To read this article in full, go to the New York Times.

And to read what doesn’t work, see Florida charter schools: big money, little oversight. Below is an excerpt:

Preparing for her daughter’s graduation in the spring, Tuli Chediak received a blunt message from her daughter’s charter high school: Pay us $600 or your daughter won’t graduate.

She also received a harsh lesson about charter schools: Sometimes they play by their own rules.

See the full article at Cashing in on Kids. 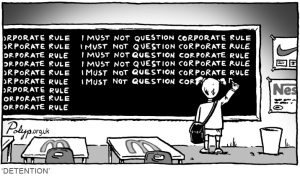 In preparation for the Boeing/Microsoft/League of Education Voters/Stand for Children and PTA assault on our state beginning in January with their push for charter schools and online learning centers, see:

Just as a little heads up here. The LEV folks think that it’s very cool how one teacher can, with the use of a program like Rocketship,  teach 40 to 50 students at a time. Just give each student a little face time each week and the rest of the time facing a computer. Every parent’s dream, right? Well, at least for Bill Gates it is.

You’ll be hearing a lot more from the likes of LEV in the coming months about these cash cows. By the way, remember Don Nielson who brought the Broad Foundation to Seattle? Well, he’s waiting in the wings with his own virtual learning program.

While we’re on the subject of online learning, check out the New York Times article Profits and Questions at Online Charter Schools.

Here is an excerpt below:

Kids mean money. Agora is expecting income of $72 million this school year, accounting for more than 10 percent of the total anticipated revenues of K12, the biggest player in the online-school business. The second-largest, Connections Education, with revenues estimated at $190 million, was bought this year by the education and publishing giant Pearson for $400 million.

The New York Times has spent several months examining this idea, focusing on K12 Inc. A look at the company’s operations, based on interviews and a review of school finances and performance records, raises serious questions about whether K12 schools — and full-time online schools in general — benefit children or taxpayers, particularly as state education budgets are being slashed.

Instead, a portrait emerges of a company that tries to squeeze profits from public school dollars by raising enrollment, increasing teacher workload and lowering standards.

To read the article in full and see what Gates, LEV and Stand have planned for us, see the Education section of the New York Times.

For something more positive, check out Jim Horn’s post at Schools Matter Join the Coalition on Teacher Quality:

While the corporate ed reformers give lip service to the importance of great teachers, they are working overtime to replace professionally-trained teachers with temporary missionaries armed with Doug Lemov’s bible who learn to teach on poor people’s children before moving on to their real careers.
Below are the Seven Principles of the Coalition on Teacher Quality, along with the list of 84 organizations that have endorsed these principals.  Click here to view a briefing sponsored by Senator Sanders and the 84 organizations of the Coalition on Teaching Quality.

To follow in his article are a list of teacher quality requirements and evaluation structures that make sense. Check it out at Schools Matter, then join the chorus and be heard.
And finally I will leave you with another searing essay by Chris Hedges,  A Movement Too Big to Fail. Below is an excerpt:

here is no danger that the protesters who have occupied squares, parks and plazas across the nation in defiance of the corporate state will be co-opted by the Democratic Party or groups likeMoveOn. The faux liberal reformers, whose abject failure to stand up for the rights of the poor and the working class, have signed on to this movement because they fear becoming irrelevant. Union leaders, who pull down salaries five times that of the rank and file as they bargain away rights and benefits, know the foundations are shaking. So do Democratic politicians from Barack Obama to Nancy Pelosi. So do the array of “liberal” groups and institutions, including the press, that have worked to funnel discontented voters back into the swamp of electoral politics and mocked those who called for profound structural reform.

Resistance, real resistance, to the corporate state was displayed when a couple of thousand protesters, clutching mops and brooms, early Friday morning forced the owners of Zuccotti Park and the New York City police to back down from a proposed attempt to expel them in order to “clean” the premises. These protesters in that one glorious moment did what the traditional “liberal” establishment has steadily refused to do-fight back. And it was deeply moving to watch the corporate rats scamper back to their holes on Wall Street. It lent a whole new meaning to the phrase “too big to fail.”

Tinkering with the corporate state will not work. We will either be plunged into neo-feudalism and environmental catastrophe or we will wrest power from corporate hands. This radical message, one that demands a reversal of the corporate coup, is one the power elite, including the liberal class, is desperately trying to thwart. But the liberal class has no credibility left. It collaborated with corporate lobbyists to neglect the rights of tens of millions of Americans, as well as the innocents in our imperial wars. The best that liberals can do is sheepishly pretend this is what they wanted all along. Groups such as MoveOn and organized labor will find themselves without a constituency unless they at least pay lip service to the protests. The Teamsters’ arrival Friday morning to help defend the park signaled an infusion of this new radicalism into moribund unions rather than a co-opting of the protest movement by the traditional liberal establishment. The union bosses, in short, had no choice.

2 thoughts on “Weekly Update: Online Learning and Charter School Failures, Successful Military Children and of Course, Much, Much More”